How It All Works

The stenotype machine works a bit like a portable word processor, but with a modified, 22-button keyboard in place of the standard qwerty setup. Modern stenotypes have two rows of consonants across the middle, underneath a long number bar. Set in front of these are four vowel keys: "A," "O," "E," and "U." 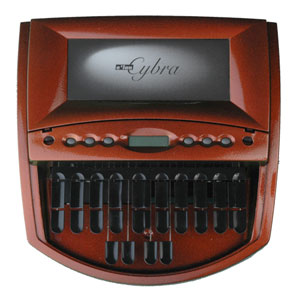 How does it work?

Stenographers can type entire words all at once by striking multiple keys at the same time. The left hand spells out the beginning of a syllable, while the right hand spells out the end; all keys are pressed at the same time, and the machine produces an alphabet soup that's incomprehensible to anyone who's not trained in machine shorthand. Stenographers spell out syllables phonetically, but there aren't enough keys on each side of the keyboard to cover every sound. Certain combinations of adjacent keys correspond to the missing consonants: For example, there's no "M" anywhere on the keyboard, so you have to press "P" and "H" together to start a syllable with that sound. There is a "B" on the right side of the board, but none on the left—that means it's easy to end a syllable with "B," but for words that begin with "B" you need to hit "P" and "W" together.

Each stenographer might use different conventions to represent homonyms or other ambiguous words. At court-reporting school, you can learn one of at least half a dozen machine shorthand "theories," which teach different approaches and general rules. But any experienced stenographer will work out his or her own abbreviations, especially for words and phrases particular to a given job. "May it please the court," for example, could be shortened to a quick stroke, as could, "Ladies and gentlemen of the jury."In the old days, everything the stenographer typed would print to a roll of narrow paper tape. Later on, the stenographer would translate the notes back to English, and sometimes another stenographer, called a "scopist," would check the translation. Now the translation is done by computer, and the fancier stenotype machines translate as they go. The paper tape still records the original notes, but an LCD display on the machine itself shows the words in regular English.

A stenographer typically saves the spellings and abbreviations he uses into a personal dictionary on his home computer. These personal dictionaries can then be transferred to stenotype machines, most of which have floppy-disk drives or USB ports. Machines can be further customized, down to the sensitivity of each individual key. These changes reflect the relative strength of each finger: The "L" key under the scrawny right ring finger is often made less sensitive, since that finger is more likely to sag and touch the key by accident.

Almost all stenographers have their own customized machines, which they take with them on specific jobs.

a company you can
count on in the boardroom, courtroom, classroom, every room